Quetta Gladiators is one of the PSL T20 cricket franchises that was formed in 2015 in order to participate in the Pakistan Super League. This professional T20 cricket franchise is owned by Nadeem Omar, who belongs to Karachi City Cricket Association and often involved in sports activities. Nawab Akbar Khan Bugti Cricket Ground is known as the home ground of Gladiator. The team represents Quetta, the capital of Balochistan that is the largest province of Pakistan. 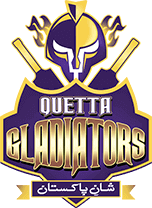 Sarfaraz Ahmed will continue the job as a captain in the 6th PSL 2021 under the mentorship and coaching of the great and iconic cricketer Viv Richards. The team had won 30 matches, lost 21, and 1 match had no result under the captaincy of Sarfaraz. Mohammad Nawaz will be the vice-captain in the PSL 2021 sixth season. Moin Khan, who had led Pakistan cricket as a captain in the past, will play the role of head coach and director. Umar Gul, who had played 60 international T20 matches, will be seen as a bowling coach in place of Abdul Razzaq in the upcoming season of PSL 2021. The team lifted the PSL trophy in the year 2019 and has been 2 times Runners-up in 2016, 2017. Shane Watson is the top scorer with 930 runs and Mohammad Nawaz is the highest wicket-takers for Q Gladiators.

The team is all set to enter the league with the following players: